Trapping is a unique skill most famous in such styles as Wing Chun Kung Fu.
The skill of trapping is primarily developing the skill of sensitivity.

Sensitivity is not necessary to be a good fighter, but it is the higher skill that can help anyone take themselves to the next level.

Often times sensitivity is replaced by speed and or explosiveness.

Jeet Kune Do practitioners practice trapping with focus mitts. This is because Bruce Lee was very into Western Boxing, and he also was into full contact sparring, which he apparently did with some of the best fighters in North America of his time.

So the Wing Chun practitioners probably have the best sensitivity skills because of how much Chi Sao (Sticky Hands) practice they do.

Jeet Kune Do practitioners are more likely to have a better sense of trapping application because of the focus mitt training.

Both are important because if you want to be able to use your trapping in real life you should go study Jeet Kune Do, but then when you want to further your sensitivity skills you should go train with Wing Chun people.
Posted by Wmpyr at 6:46 AM No comments:

As you can tell just by looking at the box package Googly Eyes is wacky fun for the entire family.
Other than fun family time, another benefit is that it encourages your kid to draw without any negative pressure.

Using the glasses you know your drawing is suppose to be bad. So people who don't know how to draw can safely play with the artists without feeling bad.

The game combines some simple play mechanics that is quick and easy to learn.
Roll dice to move on the board, first team to finish wins.
Draw a card to find out which lens to use.
Put on the crazy glasses and begin drawing!
If your teammate gets it right move forwards even more.

If you have kids this is a good game to play together!
Posted by Wmpyr at 5:43 AM No comments:

I'm just taking some notes on here to brainstorm some more later.

Number of players: 2+
Theme: Classic Horror
Play mechanics: Move pieces around a board that can be configured differently each time.

The board has illustrated areas such as the Carpathian Mountains, Ruins of Poacher Castle, Boar Yard Village, Hide Forest, and The Town of Mace Mint.

Players go to certain areas of the board to get cards.

Story cards: When requirements are met (Dracula and Wolfman are on the same spot) whomever has this card may choose to use this card at the end of the player's turn (whomever's turn it was).
It may say something like Dracula and Wolfman do not like each other so they begin fighting each other but then they notice a greater threat so they must team up! Bring out the Possessed Knight!

When Franky enters the Boar Yard Village, roll the dice to see if the towns folk are frightened or threatened!

Goal of the game is to beat the final boss.

Legends of the Hidden Temple

Legends of the Hidden Temple board game review by Wmpyr

On the box it says for 4 to 12 players.
If you have a stop watch then you can actually play some of the games by yourself.
To get the full experience though it seems like you're going to need 4 players.

True to the TV show this game is made up of many mini games.
1. THE MOAT which consists of rolling the dice rapidly.
2. THE STEPS OF KNOWLEDGE which is a quiz game.
3. GOLDEN CUP OF BELSHAZZAR which is cup flipping
4. GALILEO'S CANNONBALL which is bouncing a ball into a cup
5. THE SMASHED PRINTING PLATE OF FREDRICK DOUGLAS which is a card game of a sharp eye and reflex
6. TEMPLE RUN board game collecting treasures

If you're a fan of the TV show then this is going to be nostalgic for you.
If you don't know the TV show, then try looking it up on Youtube and see if you like it.
I think it would be good to play at a retreat or in a class.

On September of 2017
A big Thank you to Goliath Games for sending me seven games to review for my Youtube audience!

Legends of the Hidden Temple game review by Wmpyr 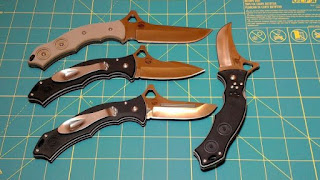 The family of LLC Knives from: WWW.CSSDSC.COM

Several years ago, pistol grip knives were not taken very seriously.
The vast majority of the public just didn't understand the benefits of such a knife.

First off, please understand that there are thousands of different knives in the market today.
Some pistol grip knives are more extreme than others. The more extreme ones are literally shaped like a handgun.

While other knives like the ones in the photo above are more mild making it easier for the average person to adopt.

Let me share with you four simple benefits of the pistol shaped knife.

1. MORE TO PUSH
The curve of the handle gives you areas to directly push on when you are thrusting.
Structure wise this is a stronger stab.

2. MORE TO PULL
The curve of the handle gives you a lever to pull back on after your thrust.

4. DEEPER CUT
Since the curve positions the blade more forwards this also means that you cut deeper on a slash compared to a standard knife.