The key to happiness I learned from martial arts is one word, and that is to coexist.
In order to coexist we need to look for similarities rather than differences.

Most people look at differences and it creates a negative effect.

The ability to look at differences and turn it into something positive is a higher skill so don't do it unless you have this ability.

Differences divide us, separation into groups cause fear, ultimately this turn into conflict, whether it's verbal, physical, or both.
In other words differences causes fighting, combat, and war.

This method only creates resentment and it's the most primitive way to do things.
It is the stupidest way to solve problems.

Remember to always look for similarities.

It could be the smallest thing in life, for example when a salesman rings your doorbell.
First make sure that you don't open your door.
You never know who the other person is and it can leave you vulnerable to very bad situations.
Anyway some guys get really mad, I mean really angry and upset, I will kill this bastard for trying to sell me something I don't want or need!

If you look at differences your going to think like, I would never get a job like that, what kind of person would take this job, get a real job! This person would sell their own mother and grandmother!

Instead look at similarities, this person is human and just trying to make a living, we both live in a tough world where money is needed.

When you look at similarities it will calm you down a little. Keep thinking that way and it will take away your anger. And the more you do this, the more pleasant you will become, and you will start to notice that the human interaction you have in your life is getting better.

Remember coexisting equals happiness.
The opposite of coexisting is war which is misery. 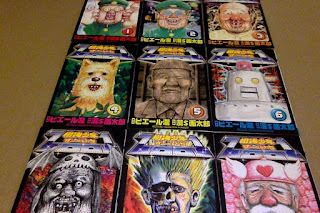 If you like extreme comedy like the movie Tim and Eric’s Billion Dollar Movie then this manga is right up your alley.
The super stylized "dirty looking" art reminds me of the great R Crumb.
If you can dig the art style and the extreme comedy then congratulations you are a rare breed and this manga is for you!
You’ve been warned this manga has ample amounts of vulgarity, violence, gore, nudity, puking, and explosive diarrhea!

The illustrator is not only known for his gross comedy but also for using the same image over and over like a lazy person trying to cheat. That is his gag style (if you can call it that). So just laugh at it when you see his "technique" and enjoy!
The story is about your typical loser kid named Juichi and a dog going on an adventure to save a hobo who has been kidnapped and brainwashed. Hobos have been getting abducted and forced to make giant robots in a secret underground factory.

The story isn’t cookie cutter, and the author pretty much just does what he wants much like the comedic genius Andy Kauffman.
The story isn’t afraid to break rules so it thinks way way outside the box like Alejandro Jodorowski's Holy Mountain.

There are many WTF moments in this manga and you just have to go with it knowing that you're reading something that is unlike any other, and that alone should put a smile to your face!

I really totally absolutely enjoyed it and I will be reading it again and again!