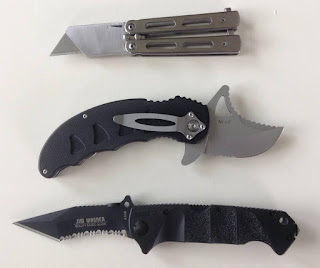 From top to bottom
1. Balisong Utility Knife
2. Snaggletooth by Mantis Knives
3. Reality Based Blade by Boker Plus

BALISONG UTILITY KNIFE
If the Karambit is the official knife for the martial art style of Silat, then the Balisong is the official knife for Filipino martial arts.
Anyways this is not your standard Balisong, it uses replaceable razor blades!
As a Balisong it's a little bit compact, thick, and heavy for it's size making it a little awkward to flip, however it still does flip, and should not give you any problems for basic flipping.
I first saw this knife on a video by YouTuber Cutlerylover.
It blew my mind and I had to get one.
Since then I have become very fond of utility knives that use replaceable razor blades.

SNAGGLETOOTH
This knife was designed by martial arts expert Morgan Thomas.
The knife features Prof. Bram Frank's trademark ramp that is used for Kinetic Openings.
A Kinetic Opening is where you hook the ramp on just about anything you can to deploy the blade with one hand.
To me this is a very well thought out knife.
For some reason this knife was taken off the Mantis Knives website and then it was sold online for a fraction of it's original price.
I don't know what happened there but my guess is that the public has trouble understanding the brilliance of this knife.
The Snaggletooth knife is impressive because you are getting four tools in one!
a) Knife
b) Karambit type of knife
c) Kubotan type of impact tool
d) Non lethal Karambit impact tool

REALITY BASED BLADE
The designer is Reality Based martial arts instructor Jim Wagner.
This knife and it's designer seem to have a bad reputation in some circles, however all that set aside, I can tell you that this is a solid knife.
I find the handle to be extremely comfortable and the unique blade shape to be effective when cutting various practice targets.
The knife is loaded with a bunch of features which have been criticized as gimmicky but don't let that distract you because I believe that at the very core we have a solid knife. 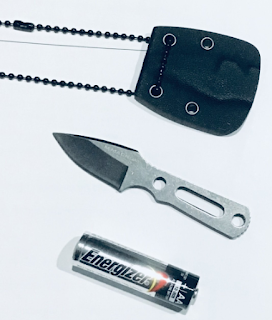 Obviously this is a barebones minimum knife.
Either that is going to appeal to you or not.

For cutting open letters and doing small everyday life choirs this mini knife works just fine.
If your work requires a lot of cutting then this is obviously not going to satisfy.
If you want a blade on you that doesn't get in the way because it's so light and compact then this is for you.

Anyways I'm not here to talk about everyday usage or specs.

My specialty is self-defense.
So let me take a look at this knife from a self-defense point of view.
I always tell my students the smaller the knife the more skill required.
And let me tell you this is a small knife!

My main interest was to get this knife so that I can attach a lanyard on it.
I wanted a lanyard that could be folded over the handle region to provide more gripping.

I haven't been able to find the exact lanyard for this job but I did experiment with a couple and it does indeed work.

With a knife like this I'm not looking for the most comfortable grip, however I am looking for ways to instantly make the grip better without making the knife too bulky.
This was possible with this knife because of the size of the lanyard hole and skeletonized design.

Once I padded the handle with a lanyard I was able to stab and cut with plenty of force.

With a blade this short accuracy becomes vital.
So you need to make sure that you put in the practice and develop some accuracy.

The main strength of this knife is how compact it is, when your wearing it under your shirt, it practically disappears.

As with every neck knife it is important to practice clearing your shirt and drawing the knife efficiently.

I did EDC this knife a few times and the sheath never gave me problems.
My knife fits secure in the sheath.

This knife is what I thought it would be and once again Boker delivered!

If I could change one thing though, it would be the addition of some very aggressive serrations.
Posted by Wmpyr at 1:05 AM No comments:

Stylish, moody vampire flick by the legendary director Jean Rollin.
When I first saw this film it left a positive impression on me.
It wasn't in my top 10 most favorite vampire films list or anything but I thought it had potential.

After watching it again, I feel like I can appreciate it more.
It's not perfect for me, for instance some of the key actors I would have not casted.

However all said and done this feels like a masterpiece in it's own rite.

I really like the concept of a little boy who has a crush on a beautiful vampire lady.
When the boy grows up he starts to see images of this vampire lady again.
The film took a detective story direction where the main character is trying to figure out where she is.

Up to this point I was drawn in but then once they started to show the anti-vampire people and explain the back story, I can't say that I was too thrilled.
I don't think it's terrible, maybe I just would have preferred a different direction plot wise.

Naked vampire women in night gowns running around the empty city at night, the sea side castle, the windy beach, all these visuals worked very well for me.

I've been playing a lot of Game Boy games recently.
There are a million titles and it's really difficult and overwhelming to figure out which ones are really worth playing.

There are a bunch of games from the hit films Alien, Predator, RoboCop, and Terminator.


Alien vs Predator is my favorite from this list even though I stink at it.
The graphics are actually amazing for Game Boy.
The various weapons you can pick up for the Predator make it cool.
Controls are the weakest part and do require some time getting use to.
Game play for me is just getting completely lost in the levels despite given a crude map.
However I'm running around as the Predator kicking butt using various weapons and that is what makes this game cool.

YouTube Gamers seem to actually really like Alien 3 on Game Boy and I can see why.
I'm not good at it but it's easily the 2nd most enjoyable game from this list.
The graphics are minimal but it actually works for this game.
It's a unique game that is surprisingly enjoyable.
Reminds me a little bit of the PS1 game Loaded but with much less action.

I'm not sure if I can recommend the rest, this is my ranking of these games.
The Good:
Alien vs Predator
Alien 3

The next 2 is for hardcore fans only:
RoboCop
T2 The Arcade Game

Avoid these next 3:
RoboCop 2
RoboCop versus The Terminator
Terminator 2 Judgement Day

Kali, Eskrima/Escrima, and Arnis are pretty much the same thing and only different in name.
I like to call it KEA just to simplify things.

Here is the curriculum breakdown for those interested in learning this art.
Keep in mind that this is definitely a generalized version.
Not all schools follow this, some do more while others do less. 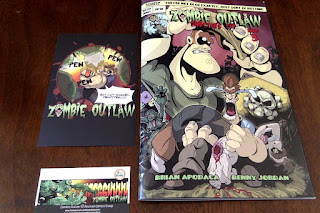 I've been a comic book reader all my life.
One thing I dislike is over exposed mainstream stuff whether it’s comics or movies, so I really enjoy reading indie(independent) comics.

Some indie titles are very amateurish in production but Zombie Outlaw has always looked extremely professional. From the printing all the way to the quality of each page.

The artwork by Benny Jordan is not your cookie cutter superhero style, it’s more of a comedy meets gore, unique and striking like Rat Fink Ed Roth style.

This being issue number 3 the story is still premature, but number 3 definitely packs the most action!

In this issue you will see a college campus being over run by zombies like the Hulkafide zombie, busty college babe zombie, and wasabi pea shooting action!

Creator Brian Apodaca leaves us hanging right when it gets good, our heroes have been cornered by the horde and they looked pretty doomed!
Will we see the Zombie Outlaw unleashed in the next issue or what?
I’m no psychic but one thing is for sure, we are headed towards zombie versus zombie action!